A few weeks ago, Staples really impressed me. Or, at least, @Staples did. In a nutshell, I’d purchased a mouse from the local store — the cheapest I could find — and it was literally falling apart that same day. More accurately, it was sliming apart in my hands. I didn’t have the receipt, and with my wife straight out of surgery, I didn’t have the time to stop by the local Staples to negotiate. But, because I was still pretty upset, I tweeted about it.

In less than 10 minutes, @Staples had written back, with the friendly (but fairly typical) message shown below. I did appreciate that they empathized with an “Oh, Yuck!” instead of trying to defend themselves or smooth things over. At this point, I was still annoyed with the mouse, and I didn’t feel like calling the helpline, but I was satisfied with the customer care provided, and no hard feelings. This is where they impressed me: Three days later, they followed up! Checking in that second time made me feel that their interest wasn’t simply in managing my comment — they actually wanted to make sure I was satisfied with how things turned out. Check this out:

I sent my contact information over, and within three days, my replacement had arrived — along with a pretty cool “Wine Voucher”, that offered $100 off a purchase of $160 or more at nakedwines.com. The wireless mouse they sent me sells for $33.88, which was approaching triple the cost of the cheapo mouse I’d originally purchased. Now I’ve gone from upset, to satisfied, to impressed, to grateful. Staples has fully redeemed themselves to me: I told my friends about the great experience and props to them as a company! (Seriously, Staples — thank you.) As a digital marketer, my experience with Staples immediately had me wondering what I could learn from their strategies: I began stalking them online. What I found was that while they’re doing a great job on Twitter and a good one on Facebook, the company (like many others) has largely ignored their customers outside of their social media accounts.

There are a plethora of review websites where Staples could be providing the same excellent service they extend to their customers on Twitter and Facebook. Most company review websites allow companies to connect with the customers who leave reviews with a company response. And, in the case of TrustPilot, Google often considers these reviews when showing star ratings in PPC advertisements. Consider the review below about how poor Staples’ communication has been via e-mail and online chat, and how powerful and redeeming it could have been had they responded helpfully: Dealman handles negative reviews on TrustPilot particularly well. In the example below, they’ve already fixed one issue in the complaint before even responding. I also like the language of, “Make it right”, which is a popular online, and is also the language used when speaking to me: Job posting websites like Indeed and Glassdoor are highly visible on search, and host a tremendously large number of company reviews. Staples has an opportunity to reach out to these websites and respond to reviews on most of these sites, but they’re not taking the opportunity. For example, this review on Indeed:

Are these reviews powerful? Absolutely. In one study by Software Advice, an HR technology evaluation company, 60% of respondents said they would not apply for a job with a company that had a one-star review on Glassdoor, while a third of jobseekers said that at least a three-star rating was necessary. And as you can see in the example above, these reviews are not going unread — 7 people voted this review as helpful, and likely took it into consideration while conducting their job search. Staples has an opportunity to get in front of these visitors, have their say, and win back some customers and applicants. Consider the way Epic Health Services tackled this, as seen below: 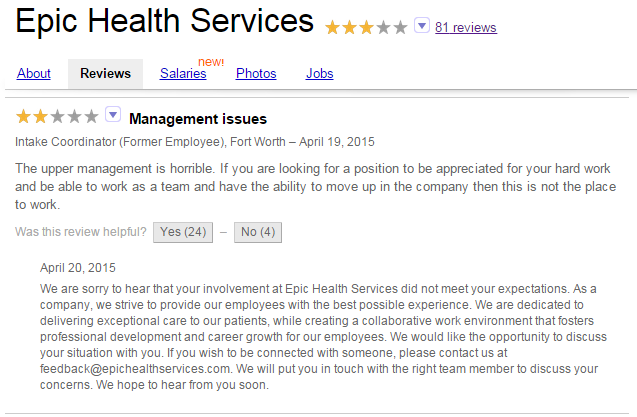 It’s important to bear in mind that a reputation management team will probably not be able to turn this angry former employee into a happy one. However, they can still show they care by publicly reaching out and connecting them with HR. In many cases, people compaining on these sites just want to be heard, acknowledged, and respected when voicing what’s bothering them. Whether you can make it right with the employee or not, trying to do so will mean something — both to them, and to anyone else who reads it.

Any person who’s so upset about an experience that they posted a video about it must be pretty upset: Watching the video, this lady has legitimate concerns. Had she brought this same complaint to Twitter, she might have come away happy. And with 76 views so far (96 at posting date), this probably has a lot more views than the average tweet — why target a tweet with such fantastic resources but ignore this video?

The Staples website seems to have some issues with compatibility on some browsers, as evidenced below and through recent comments on Twitter and Facebook. Customers on these two sites are helped, but there’s a lot of unanswered similar question floating around the forums, and some of them are extremely visible: Forums can be tricky, but if a company approaches a forum question in a way that fits its the style and tone in use, and the comments are helpful and not self-promoting, the community will find a company response to be a pleasant surprise. Even when the situation is not ideal, companies have found they can help to direct and manage a conversation to a more productive outcome. For example, this conversation on a pet forum with Ultrapet: what to take away from this

Companies spend an extremely large amount of time and resources building their brand and can lose the value of that investment very quickly. And if recent survey data stands true, this is particularly true in the online arena:

Whether you’re B2B, eCommerce, or just the local pizza joint, responding to the people who bring you business is no longer expendable, and ignoring it may be costing your bottom line dearly. However, this is not something that can be effectively compartmentalized with your core social media websites. Along with efforts on Twitter and Facebook, reputation management should include proactively monitoring for brand mentions and opportunities to join in conversations with your customers where they are. Whether you do or not, the online community will be watching — and taking notes.

What do you think about brands missing opportunities to connect with customers outside of popular social channels? We would love to hear about it in the comments below.